What Score Is Needed To Pass An Aptitude Test?

We will breakdown how aptitude tests are scored and how this may affect your practise methods.

What is a good score for aptitude tests?

Aptitude tests are used to assess a candidate's ability in a certain field. Common aptitude tests that candidates face are numerical reasoning, verbal reasoning, logical reasoning etc. The scores you are expected to get on these tests will vary depending on a number of factors so it's not as simple as saying 'you need to score 70%'.

Let's go over some of those factors that will affect the score required:

Percentages vs Percentiles - What's the difference?

There are two different scores you may come across that act as a guide to whether your score will be viewed as good enough to progress.

The two different score types are: your raw score, which is the number of correct answers you scored, and your score in comparison to the other test takers, commonly known as your percentile score.

So despite sounding similar and the ease of confusing the two, they are very different. The number of correct answers is a common percentage score you are familiar with and is usually what you would assume all the decisions are based off. For example, if you score 8/10 questions your score would be 80%. However, percentiles are in fact the common way for employers to decide who will pass the test and we will explain why.

Percentiles will take your raw score, and compare it to all other candidates to work out where you sit compared to the other test takers. This is a much better determinant, as raw scores can be unreliable.

It may be the case that the test is particularly hard so no one scores above 8/10 - so your 8/10 would place you at the very top and may score you in the 99th percentile. Conversely, it could be that the test is particularly easy (or the test takers are extremely smart) and most people score at least 9/10 - this would mean that your 8/10 is in fact not as strong as your raw score may seem.

The following image shows one of our practise test results screen where you can see the raw score (how many answers you scored) and the percentile (how you compared with other users). 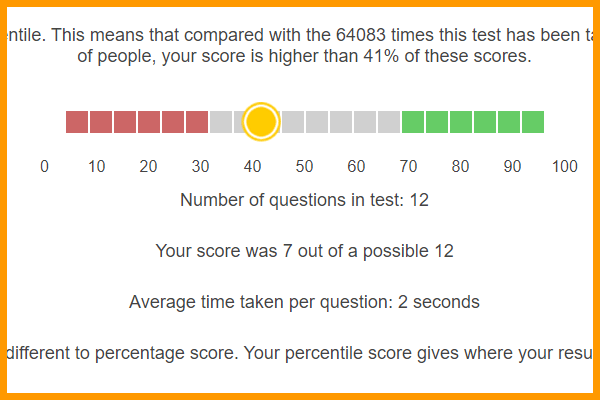 Let's explain what we've talked about so far in the context of the results from the above image.

We may be relatively happy with this score as a lot of graduate schemes are sometimes talked about having a 50% pass mark - looks like we may have just made the cut.

However, when we look at the percentile we are in the 41st percentile. You can see that our score has now dropped significantly and are now technically below average, as we only scored better than 41% of the test takers.

Unfortunately, with this score and this applicant pool, we would most likely be rejected and not progress.

Percentile scores can come as a shock due to them differing from the raw score and sometimes appearing relatively low, but it's important to note that scoring anything above the 50th percentile would mean that you scored above average and so there would be a chance you would progress/pass this test.

How to benchmark your score against others

You may be wondering: 'If percentile scores are used to determine whether I have passed this test or not, how can I know what my percentile score is likely to be for the test?'

Well this is almost impossible to tell because you need to know how well you are likely to do as well as how well others are likely to do. The best way to figure this out would be to take practise tests that include percentile scores.

All of our practise tests come with results that display your raw score as well as your percentile score. We also give you insights into your speed and accuracy percentage compared to others. This can help you tell if you're maybe being too slow on questions compared to others which is causing you to score in a lower percentile.

All of our tests come with worked solutions so you can benefit from understanding where you went wrong and learning as you develop your test taking skills with us.

We have 1000s of practise questions for you to take. Browse our practise packs to decide which would best serve your needs.

Read our other articles for more advice

Speak to one of our advisers now on live chat.