Critical thinking tests are high-level tests, with the Watson-Glaser being the most common.

About critical thinking tests and how they work

What is a critical thinking test?

Critical reasoning tests, also known as critical thinking tests, are psychometric tests commonly used in graduate, professional and managerial recruitment. These high-level analytical test are most commonly encountered in the legal sector, but other organisations such as the Bank of England also use them as part of their selection process. This test may be pencil and paper or it may be administered online depending on the format and the structure of the recruitment process. The questions will be multiple choice format and will usually be administered under time constraints 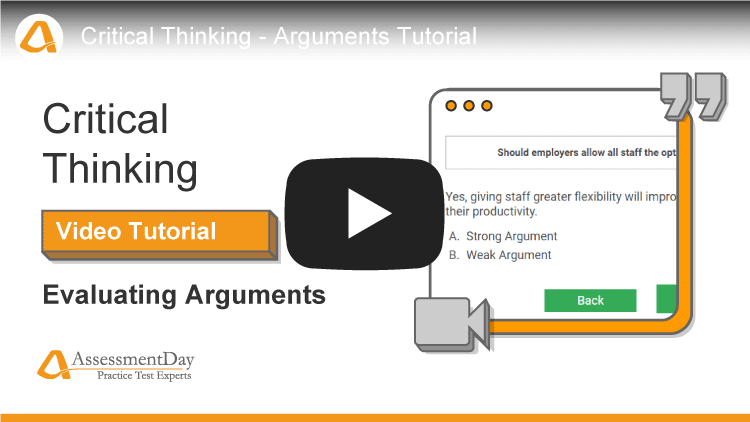 Try a real critical verbal reasoning test. Give it a go to see how a real test works!

Loads of extra tips broken down into separate sections:

Click any of the buttons below to start an online simulation of each section, or the full test, or download the questions and solutions as PDF documents. 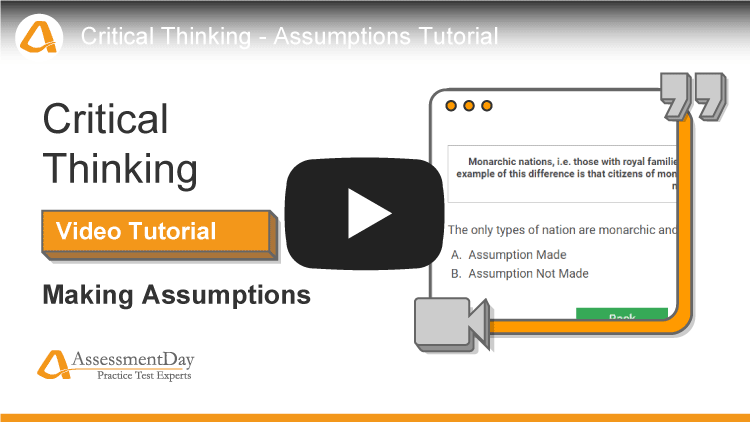 By far the most common type of critical thinking test is the Watson-Glaser Critical Thinking Appraisal (W-GCTA) which is published by TalentLens. You can visit their official site here: Watson Glaser. With over 85 years' worth of development, the Watson-Glaser Critical Thinking Appraisal is the most popular measure of critical thinking ability. The test is most commonly used by law firms, which is understandable as the abilities measured by the W-GCTA are good predictors of future success in roles which require clarity of understanding from multiple perspectives and the ability to reason with fact versus assumption.

The Watson-Glaser Thinking Appraisal (W-GCTA) is one of the main evaluating tools for cognitive abilities in professionals, since it measures critical thinking. It is seen as a successful tool to predict job success, as well as being used to select good managers and finding possible future leaders. It is also used in order to select the right person for a specific job role, especially for careers in the law.

The most recent revision of the W-GCTA was published in 2011 with notable improvements being better face validity and business-relevant items, scoring based on Item Response Theory (IRT), updated norm groups, and an online retest which can be used to validate a paper and pencil test result.

The W-GCTA was originally developed by Goodwin Watson and Edward Glaser. The W-GCTA measures the critical skills that are necessary for presenting in a clear, structured, well-reasoned way, a certain point of view and convincing others of your argument. The test questions are looking at the individual’s ability to: 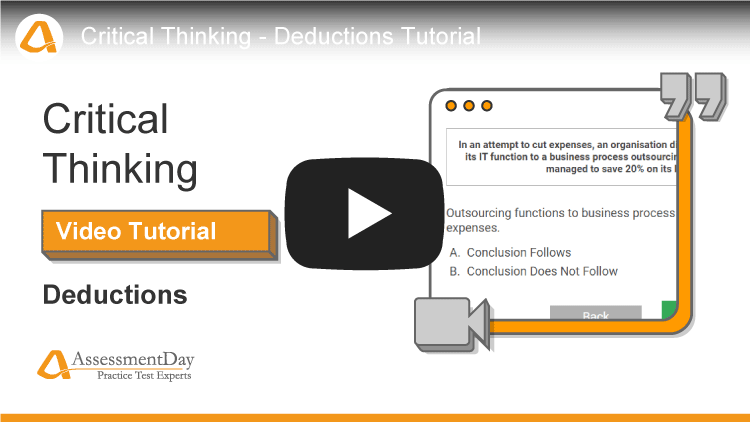 What does a critical thinking test measure?

Critical thinking tests assess your ability to logically analyse assumptions, arguments, deductions, inferences and interpreting information. You will be given a passage of information which may contain a mixture of verbal and numerical data, and will be provided with a statement which requires the candidate’s critical assessment of how true that statement is based on the above passage.

The Watson and Glaser Critical Thinking Appraisal contains five sections which are specially designed in order to find out how good an individual is at reasoning analytically and logically. There are five sections:

With so many sections, each having their own instructions and guidelines, it can be tough to become confident on all areas.

We asked critical thinking test takers what they found was the most difficult section:

What should you know before a critical thinking test?

If a critical reasoning test is used in the assessment centre stage of the recruitment process then it is unlikely that it alone will be the sole decider of the selection decision. Instead a mixture of tools will be used and combined to get a varied view of the candidate’s abilities. However if a critical reasoning test is used at the early stages of the recruitment process, it may be that this is being used as a screening tool, and poor performance may screen that candidate out at that early stage. For a critical reasoning test candidates will not be required to learn any specific material before the test and will not be asked to use prior knowledge. All the information needed to complete the questions will be provided in the test. 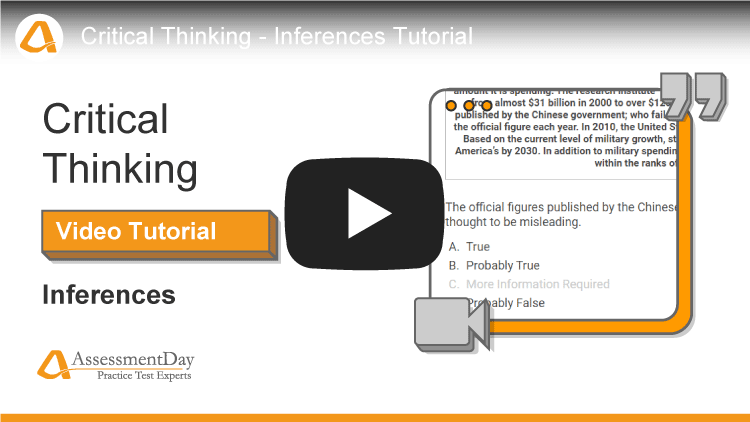 There may be variations in your test depending on the test publisher you have for your critical thinking test.

Throughout 2020, we analysed a sample of critical thinking tests to discover the most popular test publishers:

Here is a list of critical reasoning tests on the market at present, which candidates may be likely to encounter for recruitment, selection or development.

Here is some general advice to help you perform to the best of your ability for your critical reasoning test.

How AssessmentDay Can Help With Critical Thinking Tests

You can also visit the test publisher's website where they may explain what critical reasoning tests are, for example,Talentlens.

You may also be interested in these popular tests sections.

Note: AssessmentDay and its products are not affiliated with Pearson or TalentLens. Our practice tests are only for candidates who are practising for the Watson Glaser Critical Thinking Appraisal; we do not sell tests for employee selection.

Jump to a section on this page:

Buy our full practice pack for the best preparation.